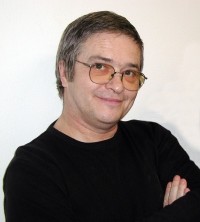 Born on 8th March, 1953 in Levoča, Martin Činovský studied under Professor Albín Brunovský from 1971 to 1977 at the Department of book design at the Academy of Fine Arts in Bratislava, spending the fifth year of his studies in 1976 at the École Nationale Supérieure des Arts Décoratifs in Paris under Professor Fiorini a Le Heude. He subsequently broadened his specialisation in graphic art with post-graduate study (1979-1984) in postage stamp engraving under Professor Albín Brunovský and Jozef Herčík. A period of study in 1982 at the French State Postal Stationery Printing House in Périgueux provided him with invaluable experience for his work in this field.

After his studies, Martin Činovský gave lectures as an external pedagogue and later as a senior lecturer and from 1990 as the Head of the Department of Postal Stationery, Legal Tender Stamps and Engraving at the Academy of Fine Arts in Bratislava. From 2006 he teaches at the Faculty of Education of the Comenius University in Bratislava.

His work has brought him numerous prizes and honourable mentions, as well as medals at the International Biennial of Small Prints in Lodz and the Ex-libris Biennial in Malbork, Poland. In 1985 he was awarded a prize by the Slovak Fine Art Fund. He was engraver of the 1988 Czechoslovak Stamp of the Year and on thirteen more ccasions has received awards from the Slovak Ministry of Transportation, Post Stamps and Telecommunications.

In 2004, Martin Činovský was awarded by the French government distinction, the title Knight of the Order of Arts and Letters. In 2012, he recieved a Golden badge from the Union of Slovak Philatelists and in 2013 a Silver Medal from the Comenius University. In 2014, the President of the Slovak republic awarded Martin Činovský by the State Honour: Pribina Cross of the 1st Class for his special merit for cultural development of the Slovak Republic. In 2015, he was also awarded by the Speaker of the National Council of the Slovak republic for his special achievements in culture and education.

Martin Činovský engraved his first postage stamp in 1986 and since 1993, when he created the first stamp of the newly independent Slovak Republic, his work is greatly sought after. In 25 years from the establishment of the Slovak republic, he created more than 150 stamp designs and engravings. His contribution to the creation of Slovak postage stamps lies not only in his unique talent and his ability to create beautiful works of art in miniature, but as a senior lecturer and Head of the Department of Postal Stationery at the Academy of Fine Art in Bratislava, he has been able to pass on his skill and enthusiasim to others. He is also a founder of the printing house, which specialises in recess printing from flat plates.

At the present, he gives lectures at the Faculty of Education of the Comenius University and creates mainly stamped and bank stationeries. Besides his intensive work in the stamp art, he also creates book illustrations, paintings, graphic art and composes music. He lives and works in Bratislava.